Today was helicopter training, with lots to learn for those of us who had never been in touching distance of one before. Lessons learned included the correct way to set off a flare, where to approach the helicopter from, how to keep all your kit from blowing away in the down draft, how to attach yourself safely to the winch to be wound in and lowered, and most importantly how not to panic! Actually it wasn’t that scary once you were in the air, it was more the anticipation and trying to keep your wits about you and communicate with everyone above the noise of the engines. The HM Coastguard crew were excellent at explaining everything and keeping us all safe and in order. We also practiced using an extra line to hold a stretcher steady as it was winched in to the helicopter, which was harder than it looked. Leather gloves were definitely an advantage. The whole team was then transported in relays to a nearby hill for a mock search and rescue, carrying out a line search over rocky terrain then assessing and treating a casualty with multiple injuries. We were lucky to do all this in dry, clear and mainly sunny conditions, obviously it would be a lot more difficult in the wet, dark or mist. A bit of reality was injected at the end though, as we had to carry the stretcher and all the medical kit back down ourselves! A great training day, most enjoyable and excellent preparation for when we are needed for real emergencies. Thanks to all involved for organising the day and to the helicopter crew for their patience.

In September 5 of the Team went on holiday together to do some climbing in the Pyrenees. 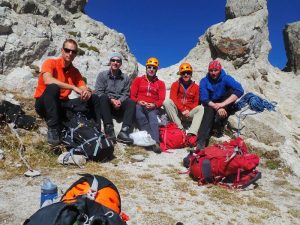 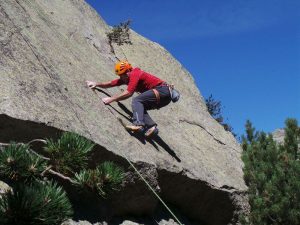 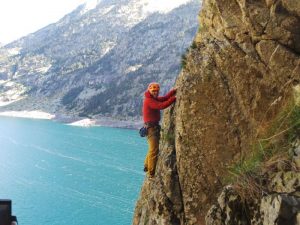 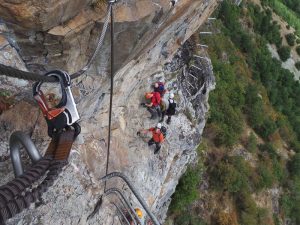 Team training this month (February) focussed on winter belays and was held in Coire an Laoigh on Beinn Eighe. The snow conditions were in our favour, with the recent weather conditions stabilizing the snow pack, the snow line being about 600 meters up. 10 team members were in attendance and it was decided to split the team into two groups, with Duncan leading the group I was in, and Jim leading the other group. A pleasant walk in good conditions led us into Coire an Laoigh where we were soon up to the snow line, and our assessment of the snow conditions confirmed what we thought we would see, and backed up the latest SAIS information.

Duncan led the way and gave us a demonstration of how to construct the following:

Waist belay from a bucket seat. The key point noted here was to always try and preserve and maintain the snow pack at the front of the seat on the downside slope as this gives the bucket seat the strength and rigidity. The front face needs to be perpendicular to the angle of the slope no matter what aspect of slope the seat is built on. The seat needs to be deep enough so that your thighs are supported all the way to your knees. (Note to myself, choose a bit of snow deep enough that you don’t hit turf too soon!) Cut out a space large enough for when wearing a rucksack. Cut out a platform to the side for the rope to sit on, saving it running off down the hillside. This should always be backed up with an ice axe. We looked at the position of the axe in the snow, and attached a sling on to the axe with an inverted clove hitch, located at the balance point of the axe; this will be a different position on the shaft dependant on the axe used so check this before burying it!

The second technique demonstrated to us was how to use a dead man. Key point taken from this was to get the correct angle to the slope which must be 40 degrees to the uphill side. This is the angle that the dead man goes into the snow surface at. Again the snow downhill side of the anchor should be kept undisturbed for security. The snow behind the dead man will need to be removed to form a trough to give room to place the dead man in at the correct angle, and a slot cut into the snow on the downside slope for the dead man wire to be positioned in. Once the dead man is hammered in, pull down on the wire using a screw gate to position the dead man in place and check to see if it holds. In our case, the dead man ripped through the snow and did not hold. After attempting this in various locations all our attempts failed, due to snow pack, so this was a good example of how the snow pack can dictate the anchor choice used.

Our last example given to the team was by Gregor who gave us an example of how to construct a snow bollard. The size of the bollard will be dependent on the quality of the snow/ice and in this example the bollard was a full arm’s length from centre point. Snow must remain undisturbed inside the bollard, and once scribed and channelled out, remember to create a lip in the inside rim for the rope to sit in. The bollard made was tested out and was found to be very secure, and took the weight and strain of a couple of volunteers.

During the day all the team members practised and constructed the various different anchors, and in the afternoon we looked at combining all three types together, trying different angles to see where strengths and weaknesses were.

To finish off the day, Gregor led the team through some info he had picked up from his recent avalanche rescue training course. Gregor set up a mock avalanche area and used the new flags from the avalanche grab bag to show us how they are used. This consisted of various different coloured flags. Yellow flags are used to mark the boundary of the avalanche area, red flags used to mark search area and rescuer activity and blue flags to mark surface finds and casualty clues. Seeing all the flags out on the snow surface certainly helped keep the boundaries visible and this was a fast way of highlighting areas of finds. The weight of the flags is absolutely minimal, so no hassle taking up the hill, unlike most kit!!

This completed the day’s training, so it was back off the hill and into the rain for our walk out, and back to base to dry out.

Mullach an Rathain, straight up from Torridon MRT base, and the west ridge out to Sgorr a' Chadail were the locations for today's Torridon Mountain Rescue Team training. A fine day to be out although chilly up top!

We would like to start by thanking you all for your continued support and keeping us quiet since March. We have been as eager as everyone else to get back out into the mountains. Below is another Q&A on where things stand from Scottish MR:

Can I visit the Scottish Mountains again?
YES, YES, YES! Welcome back!
We looking forward to seeing you out in the hills - preferably not on a rescue 😊

Are we back to normal when we visit the hills?
No! We need to work together and remember what we are trying to achieve to make this work.

Can I go Wild Camping?
Unfortunately not quite yet - the Scottish Government have advised that Wild Camping will not be able to happen until the 15th July.

Are SMR teams responding to callouts?
Yes, a lot of work has gone in to new procedures to try and make callouts as safe as possible for our team members and casualties. We also now have an adequate stock of basic PPE for a few rescues for each team.

Though to be honest we are slightly nervous, particularly if we get a sudden rush of rescues at any point, we may then struggle to cope.

Should I feel guilty if I need to call MR?
No, accidents happen, we would be concerned if you didn’t call us. We are here to help, not judge.

Remember in an emergency in the outdoors call 999, ask for Police, then Mountain Rescue.

Are rescues the same as before?
No, they will be much slower, with fewer people, more walking and carrying for us and on some occasions we may decide that we can help by phone only.

What can I do to help make it work?
Self-reliance. Plan your day carefully, refresh your skills and knowledge, stick to the type of days that you know you have done safely for several years already. Be sensitive to any local community you are visiting, they are also worried.

Do I need to take any extra equipment?
You may well have to wait for longer than we would normally like for a rescue, so group shelter or survival bag, extra warm clothing and food are a good idea. Assume you will be out overnight if that helps to plan, although we hope it won’t be the case.

Also a small hand sanitiser, face covering such as a buff and thin rubber gloves could be added.

How else can I help?
If you are reading this we suspect you will be pretty well prepared already. But we are concerned that there is a group of people, who don’t usually go to the hills, who are keen to come and experience the benefits of hill walking so please share this to anyone you know of and direct them to Mountaineering Scotland for guidance.

Updated advice for hillwalkers and climbers is here - www.mountaineering.scot/coronavirus?fbclid=IwAR3nHjia-Eop8M1zcUHnXrQS28VGw6QaJZ-ubrMSWVSvXr9lGJlA....

Essentially though the guidance remains unchanged:

Stay local: Limit your travel to around 5 miles for recreation and follow the current public health advice for Scotland to reduce the risk of spreading COVID-19.

Be prepared: Car parks, toilets and other facilities remain closed.

Be safe: Plan ahead and stay well within your limits - whatever your activity - to avoid the need for rescue and emergency services.