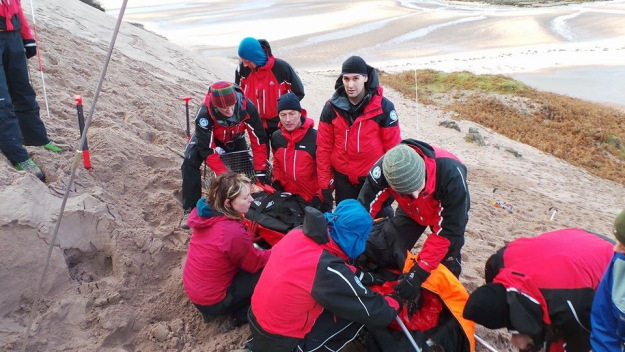 In lieu of a decent accumulation of snow the Torridon & Kinlochewe Mountain Rescue Team we were somewhat ahead of the game with Avalanche rescue training. We improvised by using the huge naturally formed sand dune at Sand, North of Applecross in Wester Ross.  There had been some concerns by Gerry and myself as to the suitability of sand as opposed to snow as we set out the day prior, somewhat furtively lest the Ministry of Defence lookout across the headland spotted us carrying a full life-sized and lifelike dummy up the dunes!

However on the day saw a good turn out with well over half the team despite the extra distance.  Indeed the team looked very festive in their new red and silver jackets from Keela (many thanks on behalf of the team) and on looking tourists may be forgiven for thinking it was the inaugural “Applecross Santa dash”

The training was taken very seriously as usual and some were heard to comment how realistic it was with the sand been blown into our faces and the line of probes with snow shovels at the ready.  The team quickly found Avalanche transceivers that had been previously buried. This shows the importance of team members to be wearing one in the event that it could be a team member that gets avalanched! It took sometime to find the buried dummy, which was not very deep and did not have an Avalanche transceiver attached.  This in turn shows the huge disadvantage in not wearing a transceiver.

Once the dummy was located the team put into practice their recently renewed first aid training.  Clearing the airway was the priority, then safely rolling the “patient” onto the stretcher with the vacmat before evacuation to a safe area.

We finished by reviewing some basic rigging making use of the sea cliff at the summit of the dunes before retiring to Gerry’s house for a most welcome and warming festive curry.

Many thanks to Jim for helping organise the day and in particular to Gerry for extending the legendary Applecross hospitality to those who had travelled from Torridon, Gairloch and as far as Inverness.

Wishing all the team and its supporters a Merry Christmas. 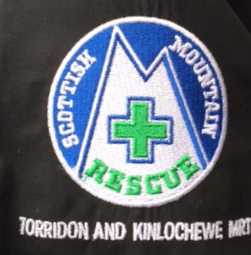 Tom suggested this additional training day as he wanted show Team members the Beinn Damh gorge where he takes groups gorge scrambling with Torridon Activities. Kitted out with wetsuits, helmets and buoyancy aids we set off from the Torridon Inn. On the way Tom pointed out the rocks at the bridge in the hotel grounds which he uses to gauge the water level in the gorge. This was fairly high on account of the heavy rain the previous day. We made our way up the gorge and took note of the escape routes and tried to identify places where we could evacuate a casualty in the event of an accident. We went as far as the large waterfall then returned to the Torridon Inn for coffee and scones.

In the afternoon we went to a small crag near Shieldaig, set up some ropes and practiced lowering and hauling using the Petzl I’D and Rescucender.

Thanks to Tom and Jim for organising the day’s activities. 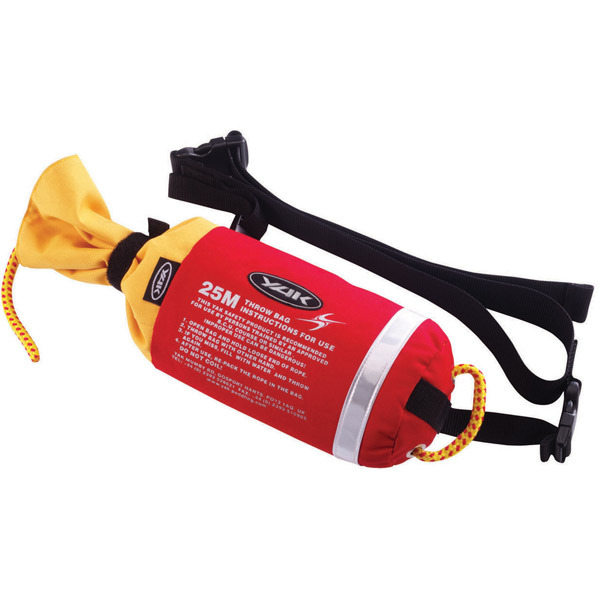 My previous first aid training had usually finished on the note … “and then I’d call the Mountain Rescue”. So this was going to be fun!!

We were briefed about a horse riding accident up the glen. Thinking this was all hypothetical & setting the scene would be left to our imaginations I set off, only to turn the corner and find 2 REAL horses & riders waiting for us! Duncan took charge and soon gave out instructions. There were lots of new pieces of equipment that I’d never used before. I was so mesmerised by the various bags, splits & oxygen that I probably broke the casualty’s neck ten times over – Best get these things ironed out in training though eh!!

Our second rescue was further up the glen. I was in the second half of the team to arrive at the scene of a mountain bike crash. By the time we got there things were pretty serious and the casualty had to stretchered to an appropriate place for the chopper to collect them. I was given the job of holding the strops bag – which I did, for dear life. As I was still unsure whether we were expecting a real chopper of not after the whole horse thing! We weren’t, but it just went to show how realistic the scenarios were. Not only with the props but by the way people were communicating with one and other. The tone of their voice and the directive commands they were giving. It was my first taste of what a real rescue might be like.

The second half of the day was a bit more chilled (literary) with river rescues. We practised our river crossings where Rod found his limits and our throw bag skills where Duncan showed us his new technique off – not holding on to the other end! It was great fun and lots of lessons had been learnt.

All in all a fantastic day only to be topped off with coffee & cake at the café in Poolewe!